After 4 decades of real-world work experience, and a few decades exploring these interwebs, I have some wisdom- or at least lessons learned. And I love to share.

Please visit DigitalGryphonDesign.Com to see some examples of my client work.

Print On Demand Websites
I opened my first POD (Print On Demand) shop at Cafepress in 2004, and have had shops at pretty much every merchandise POD site in the years since (see the list of current and former POD site shop names). I served on CafePress Voice (CPV) as a Designers Representative. For awhile I was a senior Forum Moderator at a website dedicated to supporting artists and designers who use POD sites, as well as active on a few other forums last decade.

And I used one of my numerous domains to share my experience as a professional Creative who ‘sold out’ by offering my work at online galleries and POD shops. That world has changed significantly since Amzn entered the POD field. My ‘Selling Out‘ site is no longer, but I continue to operate a small number of POD shops.

One of the Shops I continue to operate shares the heritage of 1980s and ’90s gay folk music duo Romanovsky & Philips. In addition to that shop, I redesigned their website, published a collection of their lyrics, and generally continue to promote their place in gay history.

Who Are Romanovsky & Phillips?
Singers/songwriters Ron Romanovsky & Paul Phillips played an integral part in the gay rights movement of the 1980’s and 1990’s, performing at hundreds of gay pride events and community and AIDS fundraisers, and headlining at dozens of music clubs, theaters, and concert halls throughout the country. Often they were the first gay act to get mainstream press coverage in dozens of Mid-American cities and towns,

They’ve frequently been left out or marginalized in mainstream narratives of gay history due to the fact that much of their career was made in the Heartland of the U.S., rather than in New York, Los Angeles, or San Francisco. R&P’s music and influence inspired thousands of ordinary, everyday folks throughout the country to come out, get involved, and live proudly as GLBT people. 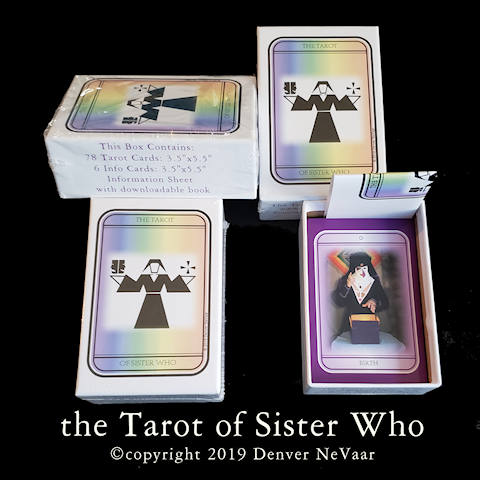 Self-Publishing Oracle & Tarot Decks
While many designers are using crowd-source funding to self-publish their oracle decks, there are some folks who can’t or won’t make the intense long-term commitment that process entails. With my POD site background, and current experience using TGC, I’ve written some notes on Self-Publishing Your Oracle Deck that highlights what The GameCrafter offers.

I’ve been an Oracle Cards Reader since 1980 and continue to collect tarot and non-tarot oracle decks that inspire me. My design and production experience combined with my experience as a Card Reader to help Sister Who publish and promote The Tarot of Sister Who through TheGamecrafter (TGC) website.

Sister Who is a sacred clown nun (inspired by the Order of Perpetual Indulgence) whose decades long ministry includes numerous personal appearances, a youTube channel, as well as 4 CDs of music and a monthly newsletter. Check out their website for more information.