To me, the biggest change to the Rider/ Waite/ Smith paradigm that Sister Who brings to their deck is their replacements for the traditional Court Cards- the pages, knights, queens and kings. I think of them as CCR (court card replacements). The next most impactful change is placing the 22 card Major Suit within a more physical journey. Not that either TSW or traditional versions of the majors card names are exclusively spiritual/psychological or totally mundane.

Although the expanding universe of Tarot and Oracle deck designs now includes many more variations of card size, 2.75″x4.75″ remains the size to which a deck is compared. I have re-sized Sister Who’s major suit, along with those CCR cards (confessor, celebrant, angel, saint) from all 4 suits, to fit on 2.75″x4.75″ cards, also available at TheGameCrafter. Of course the original 3.5×5.5 Jumbo Size deck is still available. 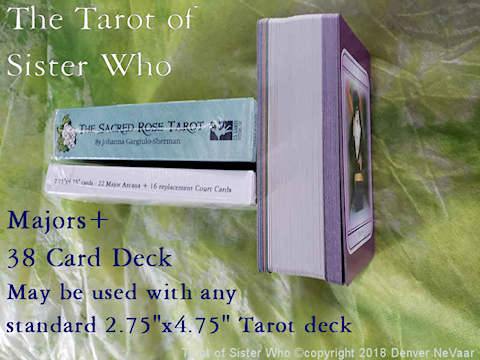 Whether you choose to use these 38 cards as a stand-alone deck, or mix some or all of them with your existing favourite, they can add new insights to your card readings or meditative practice.

Using Print On Demand makes an item more expensive. Mass production might significantly lower the price of an item if a large production run can be paid for up front. With its focus being as a contemplative meditation deck, the Tarot of Sister Who has a more boutique market.

This new version of The Tarot of Sister Who (TSW) reduces the number and size of cards, which brings down the price while providing a more traditional card size. Aside from making for an easier shuffle, it means that the TSW Majors Suit and/or Court Card replacements (CCR) may be added to an existing standard size deck- either replacing the current cards or as additions. 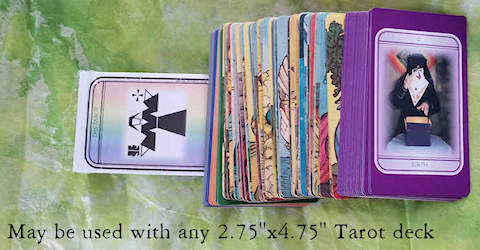 The new cards are shown here with the Sacred Rose Tarot and the Morgan-Greer Tarot decks as examples of standard 2.75″x4.75″ cards. Both of those decks are published by US Games Inc, which is not affiliated with The Tarot of Sister Who.

@ Cards are printed on 12 point (320gsm) black-core matte card stock; UV coated to protect from dirt, scratches, and moisture- all in a professional UV coated tuck box;
@ The bulk of the US$19.99 purchase price, plus all Shipping Charges, goes to The GameCrafter for processing your order and delivering a high quality item made-to-order just for you.

As of March 27, 2020 The GameCrafter (supplier of the Tarot of Sister Who and Sister Flirt’s Prayer Tin) is closed. Their automated system is processing orders placed during this time to be printed once production resumes.